Steering in the right direction 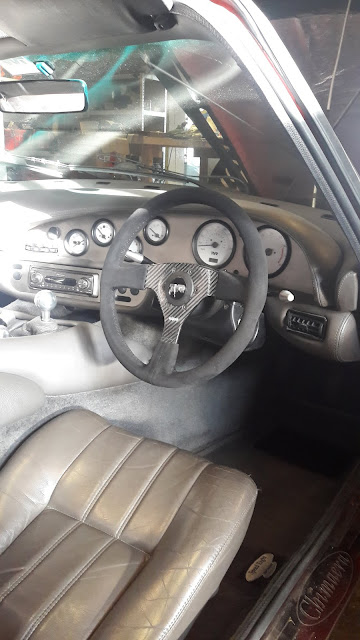 Virtually a carbon copy (pardon the pun) of the OEM Personal Grinta steering wheel on pretty much every Chimaera out there - until you hold them next to each other - with the essential distinction of being entirely made of carbon fibre and trimmed in Alcantara. More steering feel, more direct feedback through the non-squishy rim. Only about a quarter of the original's weight at around 300 gram. Not cheap at around 650 euro (but if you get together with other interested Tivosi, a small group buy discount is a possibility) - but then again, the best never is...

Although it's strongly recommended that owners of non-power assisted cars stick to the OEM 350 mm size, 330 and 315 (slightly different design for the latter, not that you'd notice...) mm sizes are available as possible alternatives for PAS applications. 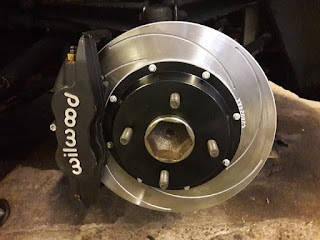 As part of the upgrades developed for 'Rosenrot' we are offering a brake kit that - unlike all others on the market - doesn't add significant rotating weight compared to the small 239.5 mm brake discs on early Griffiths and Chimaeras and will reduce unsprung weight even compared to these tiny early standard brakes! It consists of a pair of Wilwood Forged Superlite calipers bolted straight to the Sierra-sourced front uprights (no adapter plate or bracket to compromise stiffness of the assembly) and 280 x 24 mm Tarox billet steel discs mounted on custom aluminium bells with AP Racing mounting hardware. Total weight of the disc/bell assembly is 4.6 kg (OEM Ford 239.5 disc weighs 4.35 kg, 260 mm dics on later cars weigh 5.3 kg each); we've weighed the Ford Sierra Cosworth disc that is usually included in a brake upgrade of this size at 6.6 kg (if you look at the disc where it meets the bell it's obvious there has been no effort made to reduce the weight;  the braking surface is about 1.5 times as wide as the brake pad depth of the calipers it's normally used with...) . The four pot Forged Superlite calipers are much lighter than the standard cast iron Ford calipers and slider brackets at 1.9 kg each (four pot cast iron Sierra Cosworth calipers weigh closer to 5 kg each...). For brake pads we usually recommend Ferodo DS 2500 but we can advise and supply different compounds if desired.

The very high quality disc/bell combination (probably one of the very best on the market in terms of materials and finish) however does significantly affect the price of the conversion. As an alternative for those who are willing to accept a 2 kg penalty in exchange for a circa 50 %
saving on price, we can supply grooved Tarox discs or plain 'Group N' aftermarket discs to work with the same direct fit calipers.

Because of different Ford brake disc offsets having been used by TVR we would advise stopping by with the car or supplying a brake disc that came off the car.
Gepost door Speed Eight Performance op 06:36 Geen opmerkingen: 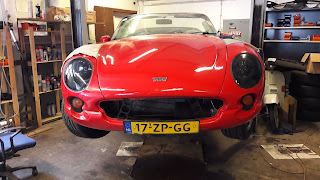 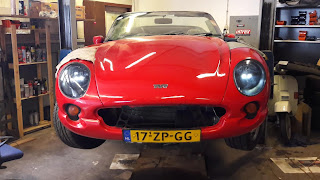 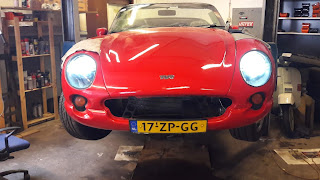